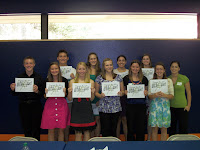 Members of the StandUP Polk and UthMpact Coalitions for a Drug-Free Polk gathered on June 16, 2011 for their Annual Planning Retreat to help guide prevention and coalition leadership toward long-term success and sustainability.

UthMpact is the dynamic coalition for teens to educate and empower their peers to make healthy decisions and take action against alcohol, tobacco, and drug use. During the past year, UthMpact members contributed a total of 568.5 service hours serving our community and providing youth with prevention services and information.

Ten of the top UthMpact team leaders in attendance were congratulated and awarded certificates for the hours of service they completed from July 2010 to June 2011 as follows:

UthMpact is always looking for new members, so if you are a teen who would like to make a positive impact in the community, please attend one of our UthMpact Meet-Ups starting in September on the 4th Wednesday of each month.

For more information, contact UthMpact Coalition Coordinator, Veronica Awai, at veronica@uthmpact.com. You can also visit www.UthMpact.com or find UthMpact on Facebook.
Posted by InnerAct Alliance at 11:40 AM No comments:

Who among us hasn’t hummed a chorus or two of the classic rock song “School’s Out” lately? Another school year has ended, summer is upon us, and it’s time to refresh and relax regular routines a bit. As parents and concerned citizens, summer also comes with a responsibility to ensure that teens enjoy a break from the school year pressures without becoming involved in negative behaviors.

Summer is the riskiest time of year when it comes to teens and substance abuse, particularly alcohol and marijuana. According to the Substance Abuse and Mental Health Services Administration (SAMHSA)’s National Survey on Drug Use and Health, more teens try marijuana for the first time in June, July, and August than any other time of the year. The lack of structure and supervision, added freedom and more time with friends may increase temptation and access to alcohol, marijuana, and other drugs.

Marijuana is much more harmful than many parents and teens think. It is a more potent blend than what was available in the 1960s and 1970s. The facts show that marijuana can be addictive, and lead to a host of health, social and behavioral problems at a crucial time when teens’ bodies and brains are still in development.

According to TheAntiDrug.com, kids who use marijuana in early adolescence are more likely to engage in risky behaviors, such as delinquency, sexual activity, driving while high, or riding with someone who is under the influence of drugs or alcohol. They are also more likely to perceive drugs as not harmful, and have friends who exhibit deviant behavior.

It’s not too late to sit down with your teen and make a summer plan that includes safe and fun activities to do with friends and as a family to beat the heat. The Parents, The Anti-Drug website offers some great ideas for summer fun including sports, games, activities, volunteerism, entrepreneurship, education, etc. Make time to visit the summer activities checklist at http://theantidrug.com/SchoolsOut/engage.asp to explore what your teens’ interests might be! Have a safe and fun summer!
Posted by InnerAct Alliance at 7:19 AM No comments: