After 21 years of building one of the largest one-mile youth running events in the State of Florida, InnerAct Alliance is taking the next step by adding Polk County’s First & Only Half Marathon to the already successful Red Ribbon Run festivities in 2013! The location will move to the picturesque Lake Mirror and Lakeland’s beautiful downtown and Lake to Lake area.

The Red Ribbon Half Marathon & Fun Run will be a family weekend where parents can compete in the Half Marathon and children can take part in the Kid’s Fun Run. K-2nd grade students will run a shorter half-mile course, and 3rd-5th graders will run one mile. All K-5 students receive free registration and a Run t-shirt, along with refreshments! Festivities also include the Kids’ Health & Wellness Carnival on Friday evening, November 8, 2013 at LEGOLAND Florida’s interactive theme park dedicated to families with children ages 2-12.
Register today to get the best price for the Red Ribbon Half Marathon…prices go up as the event draws closer, so don’t wait! Additional information, as well as online Registration for the Half Marathon and Kids Fun Run events, may be found at our official event web site at www.redribbonhalf.com

Awesome sponsorship opportunities are now available for Business and Community Organizations to join us at the starting line for this exciting event, so please call InnerAct Alliance at 802-0777 and we will be happy to mail you a Red Ribbon Half Marathon Sponsorship Brochure.

Posted by InnerAct Alliance at 9:48 AM No comments:

CEU’s
Certificate of Attendance
Breakfast
Lunch
Workshops offered by Perdue Pharma
Q & A with Local Officials and much more!!

Posted by InnerAct Alliance at 9:40 AM No comments: 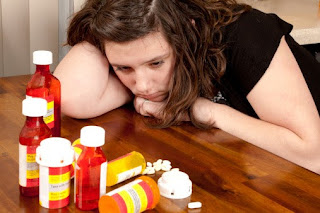 The results of a new survey reported by Join Together and The Partnership at Drugfree.org has found that 35% of the young adults surveyed, ranging in age from 10-18, think that prescription stimulant abuse is a major problem among their peers.

The teens were given booklets with pictures of drugs, and were asked questions designed to measure current levels and signals of misuse, abuse, and diversion of prescription stimulants. They were also questioned about access to prescription medication – where they got them, how they got them, and how often they took the drugs and why – and asked to suggest strategies to prevent kids from using other people’s medication.

The findings from this survey were announced at a recent annual meeting of the College on Problems of Drug Dependence.  Linda B. Cottler, PhD, MPH, and chair of the Department of Epidemiology in the College of Public Health and Health Professions, and College of Medicine at the University of Florida, shared some of the comments and suggestions from the teens surveyed, “Teens said they want to be warned truthfully about prescription drugs, but they don’t want the danger exaggerated. They want to make their own decisions.”

Dr. Cottler warned that the study confirmed how important it is that parents and other family members be cautious about where they leave their medication. She observed, “We need to reduce access and teach young people who are taking prescribed ADHD medication that other kids would like to get their hands on their drugs, so they have to be careful and not share them.”

Data like this reminds us that the problem of prescription drug abuse among teens is very real! It’s more important than ever that we take a more proactive role in educating and preventing teen substance abuse.

If you would like to learn more about what is being done in our community, please mark September 12, 2013 on your calendar and plan to attend the 4th Annual Drug Summit.  Call (863) 802-0777 for more information!
Posted by InnerAct Alliance at 9:33 AM No comments:

Have a Safe Substance-Free Summer!

Summer should be a time for chilling out, not stressing out. That goes for parents as well as kids. It’s no secret that vacation time can be a risky time for teens. Some tend to make poor decisions when they have unstructured, unsupervised time.  The lack of structure and supervision, added freedom, and more time with friends may increase temptation to experiment with alcohol and drugs.

Out with Alcohol – It’s a good idea to throw out any left-over liquor bottles that are sitting around from the holiday parties. If teens are going to experiment, it will likely be with items around the home that you are least likely to look at or touch. This also means old prescriptions and the cigarettes you might have quit a month ago. Also consider most Florida teens say when they drink they do so at another friend’s home. Consider the possibility that there’s a parent somewhere that hasn’t gotten the memo...talk to the parents of our friends and ask direct questions, such as, does my teen have access to alcohol in your home? Worst-case scenario is you’ll embarrass your teen. Let’s just say it won’t be the first or last time.

Banish the Boredom Blues – Don’t let your teens fall victim to the “I’m bored” routine. Work with your teens to make plans in advance and stick with a 24-hour notice rule for any outside activity they have planned outside of the home. Ensuring that teens are engaged in positive activities like camps, volunteering, or supervised outings with friends can be a great way to deter youth from things that are harmful to them, like alcohol and other drug use.

Secure Safe Summer Relationships – Summer jobs are great for teaching responsibility, earning money, and other valuable life lessons for teens. But, a summer job can also be a gateway resulting in relationships between your teen and older, legal drinking-age individuals. Talk to your teen about work relationships, new friends, and your expectations while they are working for the summer, including curfews and work hours.

Schedule Summer Fun – Besides structured activities and guidelines, plan for summer fun and down time too! These days teenagers are often more stressed and over-extended than previous generations of teens. Sleeping in or enjoying days at the beach with an approved list of friends might be just what they need to decompress. Do some fun things as a family too, such as going to the movies, taking a walk, or sharing a meal out.

Teens who spend time, talk, and have a close relationship with their parents are much less likely to drink, take drugs, or have sex. Have a fun summer!
Posted by InnerAct Alliance at 9:29 AM No comments: